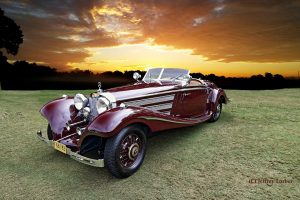 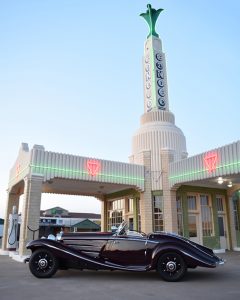 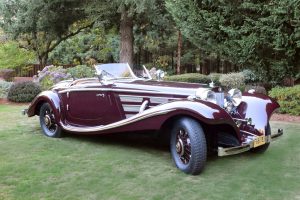 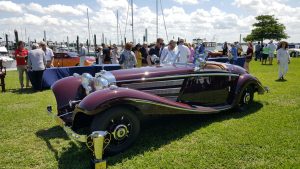 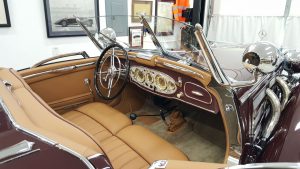 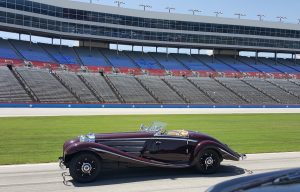 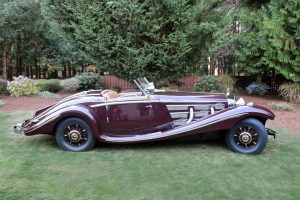 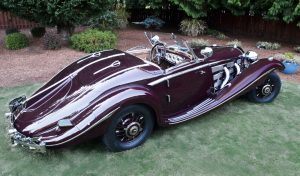 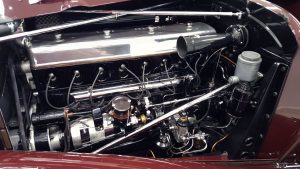 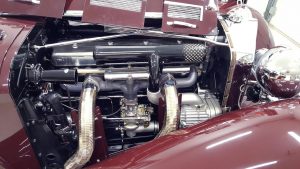 The Mercedes-Benz 500 K Spezial-Roadster is considered one of the most beautiful body styles ever created. It is powered by a supercharged 5-liter straight eight. The sound of the supercharger was described in the 1930’s as the “Trumpets of Jericho” or a “howling goddess of vengeance!” This car features the exceptionally rare and elegant covered-spare design where modern cars would have a trunk. The few who could afford this car coud also pay to have their luggage forwarded, so design did not have to take a back seat to the practicality of a trunk. (It does, however, have a rumble or mother-in-law seat.) It is believed only two 500 K roadsters left the factory with a covered spare.

It is a miracle this car exists today. Made for a customer in The Netherlands, the original cabriolet was reduced to wreckage during World War II. The remains of the once-fine luxury automobile were shipped to the US, but remained in storage until the chassis was purchased by baron J.O. Raben-Levetzau of Denmark in the 1960’s. It remained on display in the baron’s museum until the collection was liquidated in 2012. Then began the seven-year restoration to exact factory Spezial-Roadster specifications.

The ash wood frame and steel body were fabricated by the world’s foremost specialist in Spezial-Roadster body work. The restoration was done by a noted marque specialist. Every part down to the last nut was refinished, repaired or, when absolutely necessary, replaced. More than a restoration, this was a resurrection.

The cylinder head has parallel overhead valves, actuated via rocker arms and push rods from the lateral crankshaft. Suspension is a double wishbone front axle, double-joint swing axle at the rear, coil springs and damping via heavy-duty shocks. The transmission is a 4-speed manual. This car has a 129.5-inch wheelbase, a rumble seat and a disappearing convertible top.

The car was shown at eleven shows across the US in 2019, taking home Best of Show four times, People’s Choice once and other awards at a total of nine of the shows.